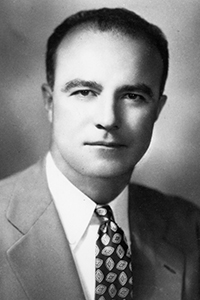 William Talley Thomas was born in Richmond, Virginia on May 15, 1909 where he attended McGuire Prep School, winning All-City honors in football, baseball and track being named All-State in football as a triple-threat star. He attended the University of Virginia from 1928 to 1934. He was the forerunner of the Student Aid Foundation and served as President of the University of Virginia Richmond Quarterback Club.

While at Virginia, Thomas was named to the College All-State football team on three occasions, All-Southern twice and was All-American Honorable mention in 1930. His three-season UVA rushing record was 1,921 yards or an average of five yards per carry. Thomas gained 699 yards passing and held a punting average of 44.5 yards. While attending Law School at the University, he served as Assistant Football Coach in 1932-1933 and turned down a Professional offer in order to remain in Law School.

Thomas was commissioned a Lieutenant in the Naval Reserve serving on active duty in the Atlantic and Pacific areas from 1942 to 1946. He retired as a Captain in 1969. His brilliant Military career included three years as Commanding Officer Richmond Naval Reserve Battalion, four years Commodore 5th Naval District Reserve Fleet, four years 5th District COMRESDEDIV5ND, five years 5th District Naval Reserve Policy Board and three years as a member of the Secretary of Navy National Reserve Policy Board. Thomas also served 5 Governors of Virginia as Naval Aide-de-Camp and was Co-Founder of the Richmond Navy League.