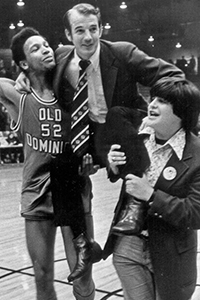 A native of Moundsville, West Virginia, William ‘Sonny’ Allen came to Old Dominion University in Norfolk, VA as the Head Men’s Basketball Coach in 1965. Over the course of 10-seasons he built the Monarchs into one of the most entertaining and successful teams in the country. His fast-paced offensive style saw Monarch teams average more than 85 points per game during 9 of his 10 seasons as head coach, and his 1967-68 team finished the season averaging 98.2 points per contest. His fast-break offense was pioneering, and Allen is credited with being the first coach to number the positions on the basketball court beginning with No. 1 as the point guard, a practice that carries on to this day. During his decade on campus at ODU, Allen led teams won 181 games, made six appearances in the NCAA Division-II tournament and two Final Fours, culminating with a 1975 NCAA D-II National Championship. The 1975 National Coach of the Year, Allen’s impact extended beyond the court as well. He became the first coach at a predominantly white school in Virginia to offer a scholarship to an African American athlete, when he recruited Arthur ‘Buttons’ Speakes to ODU in the late 1960’s. Allen has previously been inducted into the Old Dominion University Athletics, Marshall University Athletics, and University of Nevada, Reno Athletics Halls of Fame.