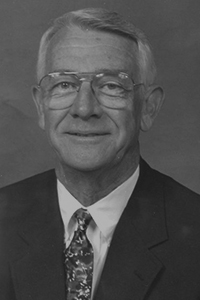 Bill Chambers was born on December 13, 1930 in Lynchburg, Virginia.  He began his basketball career at Lynchburg’s E.C. Glass High School where, in his senior year, he was center on an undefeated (22-0) State Championship team.

Chambers went on to play basketball at the College of William & Mary where he also earned his B.S. in Physical Education.  At the college, he was All-State, All-Southern Conference and Helms All-American.  In his senior year (1952-53), he set an NCAA single game rebound record of 51 rebounds against the University of Virginia.  Also that year, he was selected as Virginia’s “Outstanding Collegiate Basketball Player.”

After graduating from William & Mary, Bill began his coaching career at Warwick High School.  After one year at Warwick, Bill interrupted his coaching career to try out with the Minneapolis Lakers.  When he was cut by the Lakers, he resumed his coaching at Newport News High School.  His three years at Newport News (1954-1957) produced a 67-8 win/loss record plus two State Championship teams in 1956 and 1957.  The Peninsula Sports Club honored him in 1957 as their “Man of the Year in Sports.”

Chambers returned to the College of William & Mary as head basketball coach in 1957.  He coached at the College for nine years and had winning seasons for six of those years.

After leaving William & Mary, he had a successful business career in the sporting goods industry with sales and management positions with Converse and Russell Athletic before retiring in August of 1994.