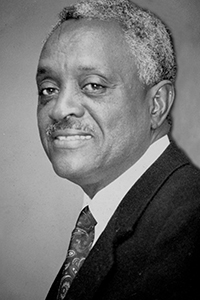 Dick Price, a Norfolk native, graduated from Hampton Institute (now University) in 1957 and has been a coaching and administrative staple in the Norfolk area ever since, simultaneously emerging as a pillar of his community.  His road to respect and success began with high school coaching at Union-Kempsville in Virginia Beach and Booker T. Washington in Norfolk.

Price then joined Norfolk State University where his track and football accomplishments were championship-laden until he moved into the chair as Athletic Director in 1983.  Until then, price had been CIAA Track Coach of the Year from 1971-1974 and guided the Spartan squads to NCAA Division II national titles in 1973 and 1974.  His football teams had won 65% of their games, among the 20 best in history at that time.  He was NAIA Football Coach of the Year from 1974-1976 and was honored by such groups as the Olympian Sports Club of Portsmouth and the Virginia Beach Sports Club.  In 1979, the Virginian-Pilot/Ledger Star sportswriters named Dick Price the Sports Figure of the Decade.

Price was named Field Marshal for the 1996 Olympic Games in Atlanta.  That followed nearly two full decades of accomplishments and honors as a tireless athletic director.  In 1989-90, he was named CIAA Athletic Director of the year.  That first year, Price established the Academic Advisory Council for Student-Athletes.  He became the CIAA Tournament Director for the 1988 and 1989 women’s basketball tournaments while also directing the men’s tournaments from 1988-1990.

Price served as the NCAA Tournament Director for the Division II Men’s South Atlantic Basketball Regional in 1989 and 1990 and shouldered the same job for the women from 1990-92, when he also headed those quarterfinals.  In 1990, Price implemented the first drug-testing program for student-athletes and the following year he devised a handbook for student-athletes.