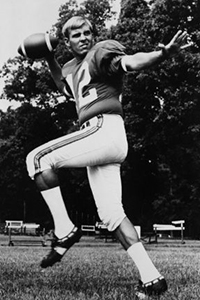 Virginia Beach native, William “Buster” O’Brien, starred as a quarterback for Princess Anne High School in the 1960’s, and his talent and success led to a scholarship offer from the University of Notre Dame. After transferring to the University of Richmond, O’Brien went on to legendary status in Spider Athletics history. An All-Conference and All-State performer at Richmond from 1966-1968, O’Brien left the Spiders program as the record holder in all passing categories. The 1968 Southern Conference Player of the Year may have saved his best game at Richmond for his last, the 1968 Tangerine Bowl, a 49-42 victory over Ohio University. O’Brien completed 39 of 58 passes for 447 yards and 4 touchdowns. He along with Virginia Sports Hall of Fame inductee, Walker Gillette, shared game MVP honors in what is still Richmond’s only bowl win in school history. In addition to his Virginia Sports Hall of Fame induction, O’Brien is a member of the University of Richmond Hall of Fame, the Virginia High School League Hall of Fame, and the Citrus Bowl Hall of Fame. From 1980-1985, O’Brien served the Commonwealth as a Delegate in the General Assembly. He is currently a judge in the City of Virginia Beach.