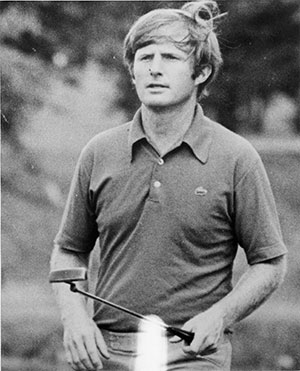 Vinny Giles, a native of Lynchburg, has placed his name with the elite by winning the amateur championships of America and Britain.  Giles began winning in competitive golf at such an early age that he appears to be an old established pro.

Giles captured his first Virginia Amateur Championship in 1962 and his sixth in 1971.  To prove that he could beat the pros at their game, Giles went out and won the 1969 Open Championship of the Virginia State Golf Association.  With such potential for the pro tour, Giles made the decision to “never play for pay,” and maintain his amateur status.

Giles won the U.S. Amateur in Charlotte, N.C. in 1972, the last year that tournament was decided by stroke play.  His score for 72 holes was 73-68-72-72-285, one over par and three shots better than runners-up Mark Hayes and Ben Crenshaw.  In 1975, Giles won the British Amateur in Hoylake on the Royal Liverpool Golf Club, edging Dick Siderowf in the semifinals and then walloping Mark James 8 and 7 in the finals.

The golf fans in Virginia saw Giles win his Eastern Amateur Championship in 1973 by winning a playoff over Bob Byman, David Strawn and Dallas McCoy.  He qualified for the playoff chance with a 100-foot chip-in at the 72nd hole of regulation play.