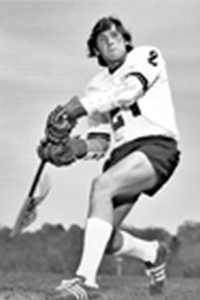 Tom Duquette of Virginia Beach garnered much attention on the lacrosse field at the University of Virginia.  As a standout freshman attackman for the Cavaliers, Duquette led the ACC in scoring with 24 goals and 23 assists.  He earned All-American honors all four years, and finished his career as UVA’s all-time leading goal scorer (107).  He still ranks in the University’s top ten for goals, assists and total points.  After graduation, Duquette played for the U. S. national team that claimed the world championship in 1974, and then transitioned into coaching.  Duquette has led the Norfolk Academy lacrosse squad since 1978, and has been named Virginia Prep League Coach of the Year five times.  Duquette is a member of the ACC’s 50th Anniversary Men’s Lacrosse Team and a 2001 inductee of the National Lacrosse Hall of Fame.