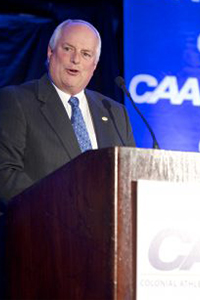 Tom Yeager served as the only commissioner in Colonial Athletic Association history from the conference’s inception in 1985 through his retirement in 2016. Over the course of 31 years as head of the CAA, he established the conference as one of the nation’s most successful both athletically and academically. Yeager oversaw the conference during a time of expansion that transformed it from a regional entity focused in Virginia and North Carolina, to one that extended its footprint up and down the East Coast. During his tenure, CAA teams produced 19 national team championships in five sports, 33 individual national champions, 16 national coaches of the year, and 17 national players of the year. The conference also boasts five Rhodes Scholar student-athletes, 24 NCAA post-graduate scholars and 13 Honda Award winners. Yeager’s influence was not confined to just the CAA, he served in numerous roles on NCAA boards and committees, including the Committee on Academics, the Football Rules Committee, and serving as chair for the NCAA’s Committee on Infractions. The graduate of Springfield College in Massachusetts, Yeager was the longest tenured NCAA Division I commissioner at the time of his retirement.