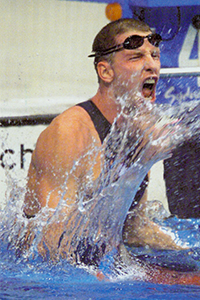 Tom Dolan, originally from Arlington, began his swimming career at age five. Despite struggling with exercise-induced asthma, Dolan aggressively pursued the sport in high school, which led him to the University of Michigan, where he won nine national championships and earned NCAA “Swimmer of the Year” honors in 1995. Dolan forwent his last year of NCAA eligibility to train for the 1996 Olympics, which paid off with a gold medal in the 400-meter individual medley. Four years later in Sydney, Dolan successfully defended his gold-medal finish in the 400-meter IM, and also won a silver medal in the 200-meter IM. During his career, Dolan set five U. S. records and one world record, and in 2006, earned a place in the International Swimming Hall of Fame.