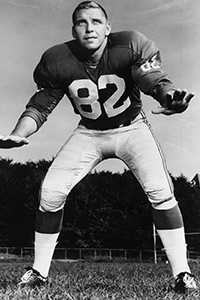 Thomas C. “Tommy” Scott Jr. is considered one of the University of Virginia’s all time greats in football.  He played both offensive and defensive end and made the AP All-American first team in 1952.  Scott was picked for the East-West Shrine game, and the College All-Star game.

While at the University of Virginia, Scott earned 10 varsity letters participating in football, baseball, basketball and lacrosse and was named to the first team All-American squad in 1953, becoming the first Virginia athlete to earn All American honors in two sports.  He was voted the best All-Around athlete in Virginia history.

Scott was the second draft choice of the Philadelphia Eagles and played from 1953 to 1958 where he was National Football League Rookie of the Year in his first season.  He went on to the New York Giants playing from 1959 to 1965, and was named All-Pro in seven of his 13 seasons playing in the NFL.  He also served as player representative for the Giants for two years.

Scott played in 4 World Championship games and 4 All-Pro Bowls.  He served as Captain of the New York Giants and, in 1966, became defensive coach.  He is also a member of the College Football Hall of Fame.