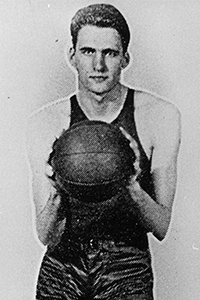 Robert Woods Spessard was born in Roanoke, Virginia on December 11, 1915. He attended Jefferson High School where he starred in football, basketball, and track. His team won the state basketball Class A Championship in 1934. Spessard entered Washington & Lee University in 1935 and graduated in 1938. He went back to W & L to receive his law degree in 1946-48. Spessard was known as one of Washington & Lee’s all time greats in basketball. He was All-State for three successive years, 1935-36-37. He was also named to the All-Southern Conference team the same three years. This was during the days when the conference was one of the strongest in the country, including such teams as North Carolina, Virginia, and other southern powers of that day. During the North Carolina game in 1936, the score ended 42-25 in favor of W & L, with Spessard scoring 25 of his team’s points. Spessard was selected on the Helms Foundation All-American basketball team in 1937. He also found time for football at W & L and, in 1937, was named to the college All-State football team.