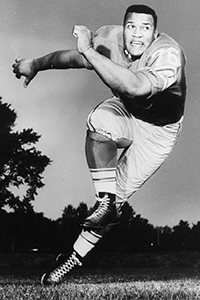 Roger Brown was born in Surry County and grew up in Newport News, Virginia.  He attended Maryland State (now University of Maryland, Eastern Shore) where he earned N.A.I.A. All-American honors while being selected by the NFL Detroit Lions.  Brown was chosen to participate in the College All-Star Game which included the top collegiate players versus the NFL Champion Baltimore Colts.

In Brown’s 1960 rookie year in the NFL, he was selected All-Pro while finishing second in the Rookie of the Year voting.  He was selected both All-Pro and played in the Pro Bowl all six years that he played with the Detroit Lions.

Brown was traded to the Los Angeles Rams in 1967 and played four years with the Rams as part of the “Fearsome Foursome” along with Deacon Jones, Merlin Olsen and Lamar Lundy.  While in Los Angeles, he was named All-Pro three years and participated in two Pro Bowl games while helping the Rams to their NFL Divisional Championship in 1967.

Roger Brown retired in 1970 after ten years in which he was named All-Pro nine times.  During his years, Brown tipped the scales at 300 pounds making him the biggest man in football during that era.

In August 2010, Brown was honored for his collegiate accomplishments with his induction into the College Football Hall of Fame in South Bend, Indiana.