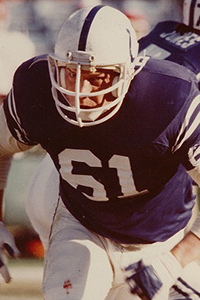 Robert Pratt, Jr., a native of Richmond, VA, started his football career at St. Christopher’s School in Richmond where he eventually earned a full scholarship to the University of North Carolina at Chapel Hill in 1970. At UNC, he started at left tackle and helped the team win two ACC Championships in 1971 and 1972. Capping off his college career, he earned All American and All ACC honors as well as the UNC Educational Foundation Award in 1974. Pratt was selected in the 3rd round of the 1974 NFL draft by the Baltimore Colts where he starred at left guard. He was a Co-Captain of the Colts and started in 105 consecutive games from 1975-1981. During his tenure with the Colts, he helped them win three straight AFC East Division titles from 1975-1977. In 1982, Pratt was traded to the Seattle Seahawks, where he again started in the playoffs in both 1983 and 1984. He was also named the Seattle Seahawks’ Lineman of the Year in 1983. In 1986, Pratt retired after a 12 year NFL career, in which he played in 170 games, most impressive for an offensive lineman.