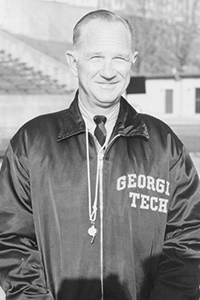 After graduation, Dodd went on to pursue a position at Georgia Tech as an assistant football coach under Bill Alexander in 1931.   He spent 14 years in that position before succeeding Alexander in 1945.   Dodd was the head coach at Georgia Tech from 1945 to 1966.  During his 22-year coaching career, his teams won 165 games, lost 64 and tied eight.  His 1952 team was unbeaten and was ranked No. 2 in the nation.  Dodd took 13 teams to bowl games and won nine.  Georgia Tech was the first school to win three major bowl games in a row, the first to win six such games in succession and the first to win three Sugar Bowl encounters.  Dodd was one of the early staunch believers in the two-platoon system, and was one of the most successful advocates of the split-T offense and its “belly” series.  He became Athletic Director in 1950 at Georgia Tech and retired from this position in 1974.

Dodd was named Southeastern Conference Coach of the Year in 1951 and has been named to the Helms Foundation Hall of Fame both as a player and a coach.  He is also a member of the National Football Foundation Hall of Fame as a player in 1967, and was given a “Citation of Honor” by the Football Writers Association for his long and honorable career in college athletics and his contribution to football.

In memory of Bobby Dodd, Georgia Tech renamed the main road of the school to 150 Bobby Dodd Way, NW. and the Grant Field Stadium was renamed Bobby Dodd at Grant Field.  He was given this honor shortly after his death in 1988.