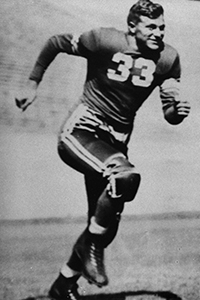 Bobby Spangler was a four-sport athletic star at Newport News High School. He was a standout in football, basketball, track and tennis. He attended Duke University on a football scholarship. While at Duke, he played as a center, an end, a blocking back and a running back. This versatility led to his key position of quarterback on the 1938 “Iron Dukes.”   As one of a quintet of returning regulars, he did the signal calling from the flank back position. He also took over the duties of safety man. During the 1938 season, he was 4th in times carried the ball, 3rd in yards earned, 3rd in net yards gained, and 2nd in average yards gained. Spangler was a man of versatile interests. He served as vice-president of the Men’s Student Government Association and as President of his fraternity chapter. His area of study was mathematics. Spangler coached one year at Morrison High School, which is now Warwick High. He then coached at Atlantic Christian College in East Point, Georgia before coaching at Catawba College in Salisbury, North Carolina. For many years after leaving coaching, he worked as a volunteer for youth programs in the Williamsburg area.