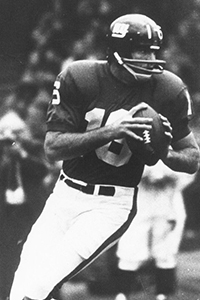 Norman Snead was an outstanding football, baseball and basketball player while at Warwick High School.  He grew up in the Marshall Courts section of Newport News, Virginia.  At one time he struck out 16 batters in a baseball game, averaged 21 points a game in basketball and had few peers as quarterback at Warwick High.

Snead set most Wake Forest University passing records limiting himself to just football after playing basketball as a freshman at the university.  In that time, colleges played one-platoon football.  One of his greatest memories was leading the Atlantic Coast Conference in interceptions one year with seven.  Snead commented “I couldn’t run and couldn’t get out of my own way, but could throw the football and left Wake Forest with 15 conference single-games, season and career passing records,” his school passing records endured for almost two decades.

For 16 years, Snead played in the National Football League serving as quarterback with the Washington Redskins, Philadelphia Eagles, Minnesota Vikings, San Francisco 49ers and New York Giants, appearing in the Pro Bowl in 1963, 1965 and 1972 seasons.