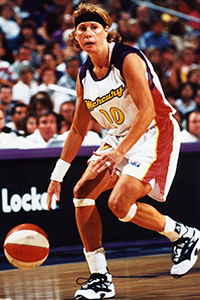 Nancy Lieberman, one of the most accomplished and recognized individuals in the history of women’s basketball, added a new dimension to her prolific sports career as she guided the 1998 Detroit Shock to a remarkable 17-13 season in her first campaign as General Manager/Head Coach of Detroit’s WNBA entry.  As GM/Head Coach, Lieberman–Cline directs the Shock’s entire basketball operation, managing the franchise’s front office and coaching staff, overseeing the team’s roster development and all player acquisitions while also coaching the team on the floor.  Her first year success on the coaching sidelines garnered her a second-place finish to two-time WNBA Champion Houston Comets Coach Van Chancellor in the 1998 WNBA Coach of the Year vote.

In 1975, Nancy Lieberman was the top high school prospect in the nation and elected to play her college career at Old Dominion University.  Coming off Old Dominion’s first AIAW National Basketball Title in 1979, Lieberman played on the USA’s gold medal-winning World Championship Team and silver medal-winning Pan American Team that summer.  By the time she finished her playing days at Old Dominion in 1980, she had led the Lady Monarchs to two consecutive AIAW national championships, one NWIT championship in 1978, was named the only two-time winner of the Wade Trophy and was selected as the Broderick Award winner for basketball as the top women’s player in America.  She earned three consecutive Kodak All-America awards (1978-79-80) and posted collegiate statistical totals of 2,430 points, 1,167 rebounds, 983 assists and more than 700 steals in her 134-game career.  Lieberman played the final game of her collegiate career in the state of Michigan when her Lady Monarch’s team defeated Tennessee in the 1980 AIAW national championship game played at Central Michigan University.

In 1997, Nancy Lieberman-Cline was drafted by the WNBA’s Phoenix Mercury in the second round of the league’s Elite Draft (15th pick overall), and made one of the most storied returns to the court in basketball history.  At 38, she was the oldest player to wear a WNBA jersey.  Her team went on to win the Western Conference title, lead the league in attendance with 13,703 fans per regular-season game.  That same year she was elected as president-elect of the Women’s Sports Foundation.  Five months later, she found herself in southeastern Michigan, ready to take on one of the biggest challenges of her professional life.  She surprised many people with her inaugural performance on the WNBA sidelines in coaching an expansion team to a winning season, the Detroit Shock, which has been the greatest Shock to ever hit the world of women’s basketball. Lieberman’s greatest accomplishments was becoming the first woman to be inducted into the New York City Basketball Hall of Fame in 1993 and inducted into the Basketball Hall of Fame in 1996.