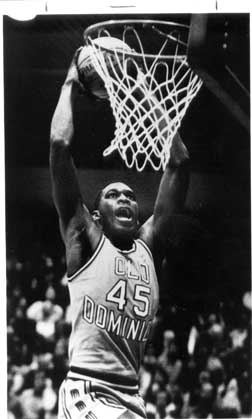 Originally from Petersburg, Virginia, Mark West first made his name in sports while at Old Dominion University. There he was a three-time All-American and led the nation in blocked shots in both his sophomore and junior year. While at ODU, he scored 1,308 career points, grabbed 1,113 career rebounds and shot 56 percent from the field.

On three separate occasions he performed the triple-double, reaching double digits in points/rebounds & blocked shots in a single game. But his biggest college game may have been in 1980 when he hauled in nine rebounds to help the Monarchs to a 63-62 upset win at undefeated and top ranked DePaul.

West served as a player rep and a member of the executive board of the NBA Players Association. He is also a member of the ODU Sports Hall of Fame where his number 45 was retired in 1984. He currently serves as Assistant General Manager for the Phoenix Suns.