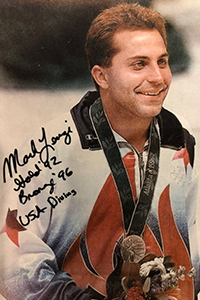 Mark Lenzi grew up in Fredericksburg, Virginia attending Stafford High School. Inspired by Greg Louganis’ performance at the 1984 Summer Olympics, Lenzi took up diving at the age of 16. From there he would be offered a scholarship to compete at Indiana University. While diving for the Hoosiers, Lenzi won five BIG-10 titles, and back to back NCAA titles 1-meter springboard competition in 1989 and 1990. Both seasons ended with Lenzi being named NCAA Diver of the Year. Lenzi first garnered attention on the international stage when he was selected to the U.S. National Team in 1989 prior to graduating from Indiana.  In 1991 and 1992, Lenzi was named U.S. Diver of the Year, becoming the first diver in the sport to eclipse the 100-point mark with a single dive. His success culminated with a gold medal triumph in the 3-meter springboard at the 1992 Summer Olympics in Barcelona. After briefly retiring from the sport, Lenzi would return in 1995 and in 1996 add to his medal collection with a bronze medal at the 1996 Summer Olympics in Atlanta. In total, Lenzi would claim the top spot in 18 international competitions at the 1-meter and 3-meter springboard levels. He was inducted into International Swimming Hall of Fame in 2003. Lenzi passed away in 2012 after fighting bouts of fainting spells, and severe drops in blood pressure.