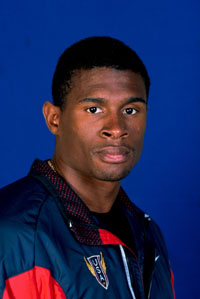 Lawrence Johnson began his track and field excellence in Chesapeake, VA at Great Bridge High School. Originally a hurdler, Johnson made the switch to pole-vault his freshman year and the rest is history. LoJo as he is known, would win two Virginia State Championships, as well as National Indoor and Outdoor Championships in the pole vault, while still in high school. Taking his talents to the University of Tennessee, Johnson would re-write the record books during his time on campus. In his 4-years as a Volunteer, Johnson would win 7 Southeastern Conference Championships, 4 NCAA Championships, and set an NCAA record in the pole-vault that would stand for 25 years. His success would continue as a professional as well. Between 1996 and 2001, Johnson would win 7 U.S. National Indoor and Outdoor Championships, and in 2001 took home the gold medal at the World Indoor Track and Field Championships. A two-time Olympian in 1996 and 2000, Johnson won the silver medal in Sydney, Australia in the 2000 Summer Olympics, clearing 19-feet and 4.25 inches. With that jump, Johnson became the first African-American pole-vaulter to medal in an Olympic Games. Johnson continues to show his passion for the sport, training the next generation of pole-vaulters at his LoJo Vault Assault Academy.