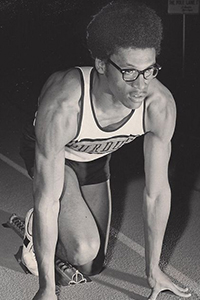 Lawrence Burton, a native of Melfa, VA and graduate of Purdue University, was an All-American flanker and first round draft pick of the New Orleans Saints in 1975. Burton was also a world-class sprinter who finished fourth in the 200 meters in the 1972 Summer Olympic Games in Munich, Germany. In 1974, Burton starred for the Purdue Boilermakers football squad and was the team captain and MVP. Among his awards at Purdue were 1974 Outstanding College Athlete of the Year, First Team All-Big Ten, and the Big Ten Medal of Honor. Burton also starred on Purdue’s track team earning four Big Ten titles, an NCAA title for the 200 meter dash in 1972 and tied a world record of 5.9 seconds for the 60 yard dash. Burton was inducted into the Purdue Athletics Hall of Fame in 1996. He caught 35 passes as well as four touchdowns for the Saints before signing with the San Diego Chargers in 1978 and helping them in the playoffs. At age 28, Burton retired from the game of football. Career totals include 44 catches for 804 yards, seven touchdowns and averaging 18 yards per catch.