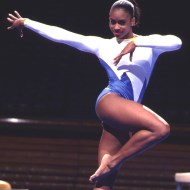 Kim Hamilton Anthony, a native of Richmond, Virginia was the first African-American to receive a full athletic award to attend the University of California at Los Angeles for gymnastics. At UCLA, Anthony earned All-America honors six times and was the first female gymnast to win three consecutive NCAA individual floor titles. At the NCAA Regional level, Hamilton won seven individual titles, which is tied for the most-ever at UCLA. Hamilton won Pac-10 Championships on uneven bars and floor exercise in 1988 and 1989. Hamilton Anthony was the first to win three consecutive Floor exercise titles. Prior to her career at UCLA, Hamilton Anthony was a member of the US National Team from 1984-1986, an All-Around Gold Medalist at the 1984 South African Cup, and a Gold Medalist in Floor Exercise at the 1984 Coca-Cola Invitational in London, England. Hamilton became the second gymnast inducted into UCLA’s Athletic Hall of Fame and was named to the All-Century Pac 12 Women?s Gymnastics Team.