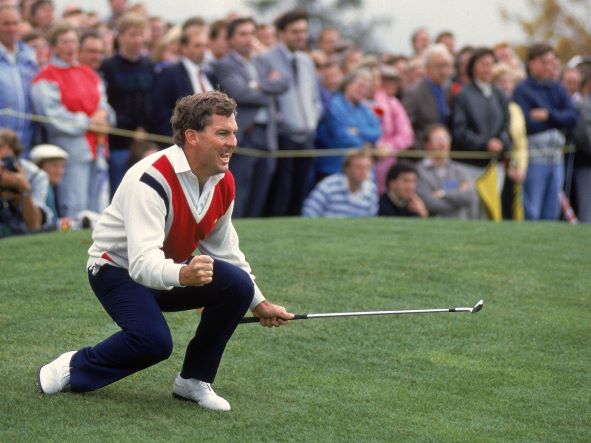 Lanny Wadkins was born in Richmond, Virginia, on December 5, 1949. A graduate of Meadowbrook High School and Wake Forest University, he has had the kind of career that history is made of. Wadkins has impressive amateur records and has won 4 International victories. He has been a member of 10 national teams and has won 2 or more victories in every decade since turning pro and also has one Senior PGA tour victory under his belt.

Wadkins was the 1968 and 1970 Southern Amateur champion and the U.S. Amateur champion in 1970. He is a winner of 21 tournaments in a 27-year PGA Tour career. His first victory came in 1972 at Sahara Invitational in WadkinÕs first full year on tour. Wadkins has won twice in the same season five times in 1973-77-79-83-88 and three times in a season twice in 1982-85. He won the 1977 PGA Championship in playoff with Gene Littler. Three weeks later, he defeated Hale Irwin and Tom Weiskopfby by five strokes at the World Series of Golf. Wadkins finished third on money list that year and also placed third on the money list in 1983, when he won twice in the Greater Greensboro Open and MONY Tournament of Champions along with two seconds and a third. He won the 1979 Tournament Players Championship (now THE PLAYERS Championship) at Sawgrass CC. Wadkins was selected as PGA Player of the Year in 1985 and, in 1990, won the Fred Meyer Challenge with his brother Bobby.

In 1992, Wadkins won the Canon Greater Hartford Open and entered the final round with five strokes behind Donnie Hammond. Wadkins shot closing 65 to post 6-under par 274 and defeated Hammond, Nick Price and Dan Forsman by two strokes. He served as the 1995 Ryder Cup Captain after having played on the team eight times. Wadkins is considered a fierce competitor by many in the golf world.