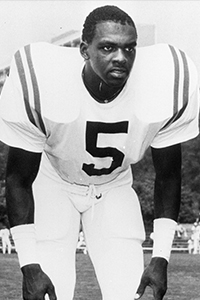 Recognized as one of the greatest athletes to ever play in the Hampton Roads area, Ken Easley was a multiple sport star at Chesapeake’s Oscar Smith High School.  The talented athlete played football at this school from 1973-1977 and was voted All-Southeastern District, All-Tidewater, All-State, All-South and All-American.  He was later named to the All-Tidewater Golden Jubilee Team covering 1932-1982.

Going on to college at the University of California Los Angeles (UCLA), Easley was a three-time Consensus All-American and the first player in PAC-10 history to be named All-Conference for four years.  He holds records at UCLA with 19 career interceptions and 336 yards in punt returns during a season.

In 1981, the Seattle Seahawks made Easley their first round pick in the NFL draft.  A good choice as Easley was named an NFL All-Rookie selection and as the AFL “Defensive Rookie of the Year.”  Easley followed up his first year in grand fashion starting a four-year string of being named All-Pro, All-AFC, and All-NFL.  Twice during his seven-year career, Easley was named the Seahawks’ “Most Valuable Player,” and in 1984, was selected as the AFC & NFL’s “Defensive Player of the Year.”

Following the 1987 season, Easley announced his retirement from the NFL due to injuries sustained during his outstanding career.  Easley was inducted into the Oscar Smith High School Hall of Fame in 1987, and in 1991, his peers recognized him for his accomplishments being inducted into the College Football Hall of Fame. In 2002, the Seattle Seahawks recognized Easley for his career accomplishments with his induction into the Seahawks Ring of honor.