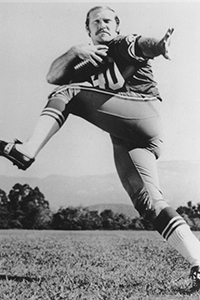 Ken Willard was born in Richmond, Virginia where he grew up and attended Varina High School. He was not only an outstanding athlete, but also a good student, being selected to numerous academic honor societies. Willard earned 16 varsity letters at Varina, participating in football, baseball, basketball and track. Willard attended the University of North Carolina where he played football and baseball, being named to the All Atlantic Coast Conference team in football in 1962, 1963 and 1964 and the All Atlantic Coast Conference team in baseball in 1964. He earned All-American honors in 1964 in football, being selected by Playboy magazine, the College Coaches Association and Parade magazine. Willard was named an Academic All-American and was selected as a member of Carolina’s all time football team. In 1963, he was selected Most Valuable Player in the Gator Bowl and was inducted into the Gator Bowl Hall of Fame in 1991. In 1965, Willard played in the North-South All-Star game, College All Star game and All-American All Star game, where he was voted Most Valuable Player. He was the first draft choice of the San Francisco 49er’s in 1964 where he played from 1965-1973. He was traded to the St. Louis Cardinals in 1974 where he finished his career after the 1975 season. During his pro years, Willard gained over 6,200 yards and scored over 60 touchdowns. He was named to the NFL All Pro team in 1965, 1966 and 1968. He was selected to the NFL west All-Star team in 1966, 1967, 1969 and 1970.