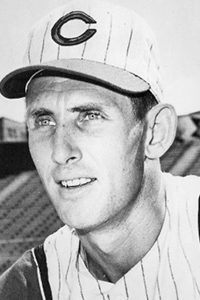 James A. “Jim” Coates was born in Farnham, Virginia on August 4, 1932.  He played baseball in high school and Semi-Pro ball in Lively, Virginia.  He began his baseball career as a pitcher with the Chesapeake League in the 1940’s.  From 1949 to 1950, he played in Warsaw, Virginia with Ex-Major League and Professional League players.  It was July 1949 when Coach Billy Walker convinced him to try out at the Yankee Camp in Norfolk.  He signed a contract with the New York Yankees in December of 1951.  In March of 1952, he attended the Yankees’ spring training camp in Florida.  From there, he was assigned to Olean, New York in the Pony League.  After one season in Olean, he moved up to the Piedmont League in Norfolk and also played in Joplin, Missouri.  In 1954, Coates moved to the Eastern League playing in Binghamton.  After a brief tenure in Binghamton, he returned to the Piedmont League in Norfolk.  In 1955, Coates was assigned to Birmingham, AL in the Southern League, but played part of the year in Binghamton, NY, as well.

In 1956, Coates played for the Richmond V’s in the International League in Richmond and also arrived in the majors, playing for the Yankees in the American League.  The road to the majors wasn’t as straight as his fastball, however after joining in 1956; he broke his pitching arm the summer of 1957.  For eight weeks, his arm was in a cast and his Major League career seemed over before it had really started.  Two years later he was back and Coates came back full force into the big leagues with the Yankees in 1959.  He was a vital member of their starting rotation for four seasons.  He compiled a record of 37-15 in four years and was a major contributor to three American League flags from 1960-1962, and two World Championships.  As a Yankee rookie with a record of 6-1 and a 2.88 era, he was named to the 1960 All-Star Game.  In 1960, his 13 wins were second highest on the Yankee staff.  His winning percentage (.813) that year was a record with the Yankees and was highest for the league.  Coates’ 11-5 record in 1961 elevated his three-year career to a remarkable 30 wins and just 9 losses.  In 1962, working almost exclusively in relief he chalked up an additional seven victories, while saving a half-dozen games.  He holds the record today at Yankee Stadium of 27-5.  He also pitched for the Yankees in three World Series, 1960-61-62.

Jim Coates went on to play in the American League in 1963 and played with the Cincinnati Reds in the National League.  He later played in the Pacific Coast League with the San Diego Padres, Seattle Angels, and the Hawaii Islanders, where he retired from baseball in the 1970 baseball season.  After retiring, Coates returned to his native home in Lancaster, Virginia.