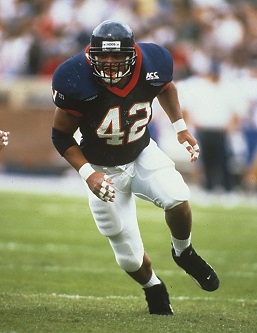 James Farrior, a native of Ettrick, Virginia, was a Parade High School All-America selection at Matoaca High School before attending the University of Virginia. As a Cavalier, he racked up 381 tackles, ranking him third on the school’s all-time list. The linebacker was selected as the 8th overall pick in the 1997 NFL Draft by the New York Jets, where he spent the next five seasons. Following the 2001 season, Farrior signed with the Pittsburgh Steelers, making him one of the greatest free agent signings of all-time. Over his 15-year NFL career, Farrior was a two-time Pro Bowl selection, first-team All-Pro selection and two-time Super Bowl Champion

Photos courtesy of the Pittsburgh Steelers and the University of Virginia.