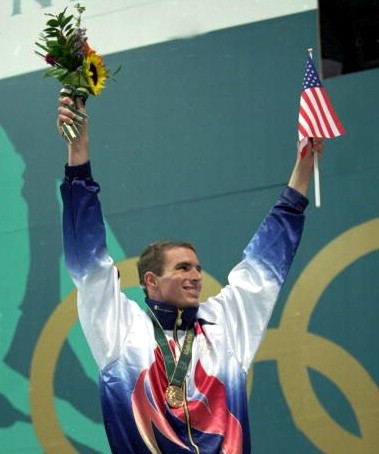 Jeff Rouse, born in Petersburg, VA, started swimming at the age of 5 and set national age group records at age 11. He was named Swimming World’s age group swimmer of the month in 1983 and named Rookie of the Meet at his first US National Championships. He has four US National Championships in the 100y Backstroke, 100m Backstroke and two-times the 4X100 Medley Relay. Rouse attended Stanford University where he was a 7-time NCAA Individual Champion swimmer. In the 1992 Barcelona Olympics, he earned a Gold Medal in the 4X100 Medley Relay and a Silver Medal in the 100m Backstroke. In the 1996 Olympics, held in Atlanta, Rouse led the US Olympic swim team as Captain and took home the Gold Medal in both the 4X100 Medley Relay and the 100m Backstroke. He held the world record in the 100m backstroke from 1991-1999 where in that time, he won a Gold and Silver medal at the 1994 World Championships and 2 Gold Medals at the 1996 PAN American Games.