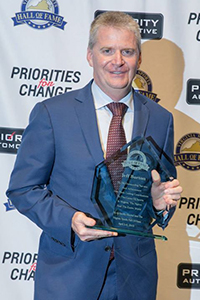 A native of South Boston, Virginia Jeff Burton has never served as mayor of his hometown; however that did not stop him from earning that nickname on NASCAR’s highest circuit. Burton got his start racing go-karts on rural tracks in Virginia, and in 1988 made his NASCAR Busch Series debut driving the #69 car, owned by his father, John Burton. In 1993, Burton made his Winston Cup series debut in New Hampshire, and in 1994 was named NASCAR Winston Cup Rookie of the Year. In 1997, while driving for the Roush Racing team, Burton registered his first Cup series win in the Interstate Batteries 500 at Texas Motor Speedway. From 1997-2000, Burton never finished lower than 5th in points for a season, and in 2000 registered four victories and finished 3rd overall in points, his best career finish. Over 22-seasons in NASCAR, Burton would start 695 races, register 254 top-10 finishes, and visit victory lane 21-times. Over the course of his career, Burton was known as one of the most respected drivers for his clean racing, and his advocacy for driver safety. In 2013, Burton joined NBC Sports as a NASCAR analyst, and still serves in the role today.