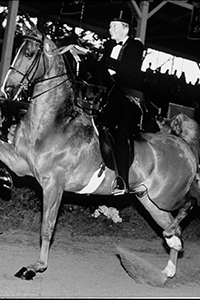 Jean McLean Davis did more in the first 17 years of her life than most of us do in a lifetime.  She was born in Portsmouth, Virginia in 1929 and rode her first pony at the age of two. By the age of 10, Davis had competed in her first horse show. At the age of 12, she won her first major championship at Madison Square Garden.  By the time Davis was 14, she had won her first World Grand Championship and repeated this feat at the ages of 16 and 17.

Thirty years later, Davis had gone on from these not so humble beginnings to win over 65 World Grand Championships, and her stable had won an incredible 845 championships. Today, Davis says she really does not know how many more there were because “Each win is wonderful.”

Throughout her career, Jean McLean Davis has competed successfully with the top amateur and professional horsemen. At the American Royal of Kansas City in 1956, Davis won the Five-Gaited Mare Stake on Twilight Walk to mark the first time this event had been won by a woman. She was only the second woman to win the Three-Gaited Stake, the other woman having done so in the 1930’s. When asked how it felt to compete in a sport dominated by men at a time when women were not doing such things, Davis replied with a smile, “That only made it more interesting.”

In her many World Championships, she has captured the Ladies Three-Gaited Stake seven times with four different horses.  She no longer keeps record of her accomplishments, but did recall her last championship in 1989, at the age of 60, when she won the Three-Gaited on Jimcrack. That same year her horse Man on Top, which she had raised and trained, won the Five-Gaited.  He repeated that feat the next year before they retired him.