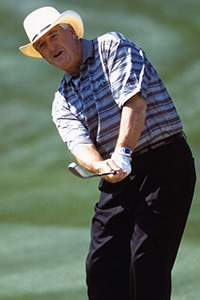 J.C. Snead, nephew of the legendary Sam Snead, made his commendable mark in professional golf after giving up a promising baseball career.  This former all-state star in three sports at Bath County High School was in the Washington Senators organization when he decided to switch to golf in 1964.  Within three years he was on the PGA Tour and became one of its more consistent players.

In 22 years, Snead won eight regular tour events, the last in 1987 when at 47 he beat Seve Ballesteros in a playoff at the Westchester Classic.  On the regular tour, Snead earned a spot on three Ryder Cup teams (1971, ’73, and ’75).  He stayed competitive right up to the time he hit golf’s magic number (50).  On the Senior Tour, he has won four tournaments, including the prestigious Players Championship in 1994 when he bested Jack Nicklaus in a playoff with a birdie on the first extra hole of a playoff.  He won last year’s Baltimore Classic at 61.

With a solid swing, Snead has made his career mark with a combined record of 12 wins and $7 million in earnings.  Known to have a quiet demeanor on the green, J.C. Snead always played with a fierce consistency that has earned him great recognition and honor in golf and sports.