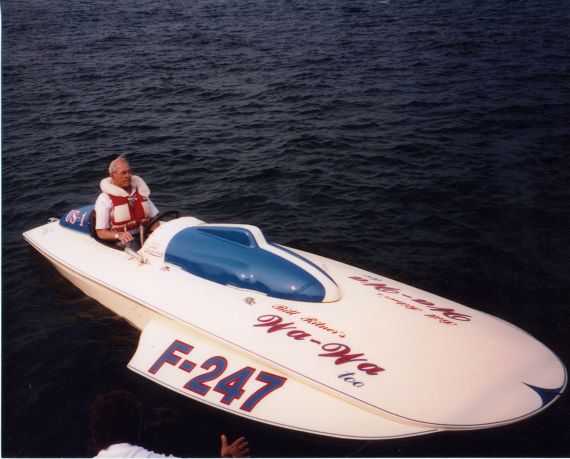 Henry E. Lauterbach was born in Norfolk, Virginia, but moved soon after to Newport News, Virginia.  He currently resides in Portsmouth, Virginia.  He has been setting the pace in racing hydroplane boats for nearly 50 years.  The builder and former champion racer, whose name is respected worldwide, is still plying his craft in Portsmouth.  In the 1950’s as a driver, he dominated inboard racing, winning big in three classes and earning national championships in 1954.  In 1956, Lauterbach won high points in three competitive classes, 135, 235, and 266 cubic inch Hydro Division.    He was named the sport’s top driver for that particular year.

Lauterbach’s fastest boat was The Boss, which averaged 178 mph on a two-way straightaway run, reaching almost 200 mph at one point.  His most successful boat was the Miss Washington, a 266 cubic inch motor, which won 51 of 52 races in one stretch.  His “Lauterbach Special” has been sold all over the world.

Lauterbach built his first boat at the age of 12 years old.  His first hydro was a 14½ footer that was built in 1947.    He has been inducted into the National Hydroplane Racing Hall of Fame along with being named to the American PowerBoat Association Elite Honor Squadron in 1974.

Lauterbach retired after winning championships in 1956, but returned to the sport in 1959 to race the Wa Wa.  It was one of the most dominating boats in what was then the biggest and fastest class, other than the Unlimited.    He proved to be the best once again by winning the national championship.  Henry E. Lauterbach has built over 200 boats in his lifetime, and currently builds boats upon special requests.