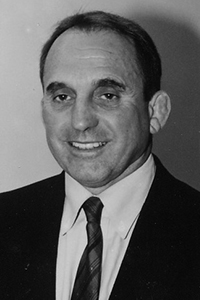 Gray Simons a native of Norfolk, Virginia had a brilliant-wrestling career that began at Granby High School. He wrestled for four straight years under Coach Billy Martin and became a state champion. He attended Lock Haven State University and had a record of 91-2, with 84 straight wins. He was a three-time NCAA Champion, and was selected as the Outstanding Wrestler six times. He was also a four-time NAIA Champion and a four-time Outstanding Wrestler. Simons’ record of winning seven National Championships and being named the outstanding wrestler in six of seven national meets is an accomplishment that has never been repeated. He participated on the 1960 Olympic Team finishing fifth and defeated the Russian World Champion. In 1963, he competed on the World Team and in the World Military Games. Simons was also on the 1964 Olympic Team and came in 7th place, finishing with two wins and two ties. After a stint in the military, Simons began his coaching career as an assistant coach for the U. S. Military Academy from 1963 to 1969. In 1965-70, he coached at Lock Haven State University and from 1970-73 he coached at Indiana State University. From 1975 to 1986, he coached at the University of Tennessee. In 1978, Simons was inducted to the National Wrestling Hall of Fame. He is currently a wrestling coach at Old Dominion University, and has been with them since 1987.