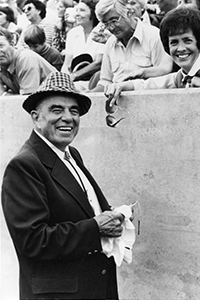 Mac McEver, for half a century, was known as “Coach Mac” to the legions of Tech fans across Virginia.  Even in his early 70’s Coach Mac was as active as he was nearly fifty years before when he joined the VPI Gobblers as an assistant football coach.

He played football, basketball, and baseball for Virginia Tech from 1925-1929, served Tech as assistant coach from 1930 to 1941, and was co-head football coach in 1942.  In 1944, he became the assistant football coach at the University of North Carolina.

McEver played with the Richmond Rebels in the Dixie League in 1946-1949 as head coach and general manager, as well as manager of the Richmond Stadium.  He returned to Virginia Tech in 1951-1960 as assistant coach in football and became Secretary of the Virginia Tech Student Aid Association.

McEver was named as Executive Secretary of the Virginia Tech Student Aid Association, Inc. until retiring from that position in 1979.  When the scholarship program began in 1932 scholarships cost $350 but by 1979, they had risen to $2,700.  McEver and his association raised over $525,000 for the Tech students’ scholarships.

After all his years as a coach, and being away from it so long, he still missed the excitement of working with young men on the field.  “The thrill of winning, that’s something you never forget.” said McEver.  McEver will never be forgotten due to his significant achievements and contributions to sports at Virginia Tech and for opportunities presented to many young athletes throughout the state of Virginia.