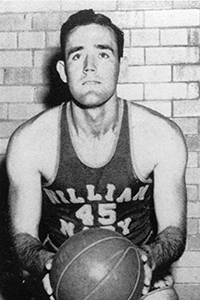 Considered one of the finest athletes in the history of William and Mary, Glenn Knox was one of the most honored two sport stars ever at the college.  The Niota, Tennessee native transferred to William and Mary from Tennessee Wesleyan in 1940 and turned in outstanding performances in both football and basketball for the Indians.

An end on the football team, he led William and Mary to the Southern Conference football title in 1942 (9-1-1) as the Indians defeated national power Oklahoma 14-7 to wrap up one of its finest seasons ever.  Knox was named to the All-Conference team along with teammates Gerrard Ramsey, Marvin Bass and Harvey Johnson.

On the basketball court, Knox, a 6’1, 190 pound forward/center had few equals.  During the 1941-42 season, he set the “Big Six” scoring record with 359 points and was selected to the All-Conference team as well as the All-State team.  The following year he duplicated those accomplishments and was named the state’s Player of the Year.