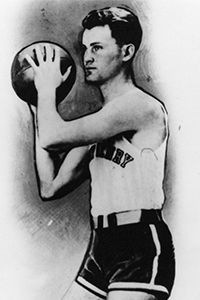 Glenn Roberts revolutionized the game of basketball at Emory & Henry College during the 1930’s.  He is credited as the first player to use the present day jump shot, utilizing his 6’4” height and playing skills to shoot while hanging mid-air, demolishing the competition.  In his four years at the small Methodist College, Roberts scored 1,531 points in 80 games, earning him a spot in Ripley’s Believe It or Not.

Born in Pound, Virginia and one of six boys, Roberts remembers rising at day break to finish his chores before walking six miles to and from school each day carrying a lantern.  When the sun came up he would leave the lantern in a nearby barn and pick it up again on the return trip.

The basketball court where Roberts practiced was a packed dirt court outside of the school, as they had no gymnasium.  Roberts led the Pound High School team twice to State Championship titles.  His prowess on the court led to a scholarship at Emory & Henry College, providing he swept floors and cut grass as well.

At Emory & Henry, Roberts earned both BS and BA degrees in four years and maintained academic honor roll status each year.  He was named All-Conference every season and was the league’s Most Valuable Player all four years.  Emory & Henry’s basketball team won 68 of the 80 games in which Roberts played.

In 1935, Roberts became the first basketball player in Virginia to be named to the All-American team.  His jerseys have been long retired at Pound High School and Emory & Henry College.