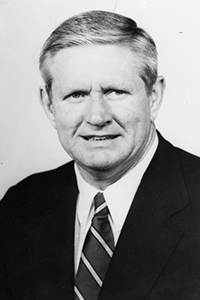 In four years at Virginia Tech, George Preas helped turn the Hokies from a winless football team into an undefeated one.  That achievement was typical of the success Preas enjoyed throughout a long career in the game.

From his sandlot days at Roanoke’s Fallon Park until he retired 21 years later from the Baltimore Colts, Preas never was satisfied with being second best.  The big tackle enrolled at Virginia Tech in 1951 after making all state at Roanoke’s Jefferson High.  When he arrived in Blacksburg, Preas joined a team that had suffered nine straight losses in 1950.  By that time, Preas was a senior and had set a record by starting in 41 straight games.  Tech was one of the nation’s best teams with record of (9-0-1 tie).  Preas’ Tech teams won often and he was rewarded by being chosen All-American, All-Southern and All-State.  With such impressive credentials, he was drafted quickly by the Baltimore Colts and embarked on a brilliant 11-year career with the National Football League team.

A highlight of his career at Baltimore came when he was voted the unsung hero of the Colts’ 1958 championship team.  The Baltimore title came in a 23-17 sudden death victory over the New York Giants in what some still call the greatest game ever played.  His teammates and coaches voted him the ultimate honor.

Preas had begun playing competitive football when he was at Jefferson High in Roanoke.  He made All-American, All-Southern and All-State.  He also won three state wrestling championships at Jefferson, one at 175 pounds and two at heavyweight.  At Tech, Preas played both offensive and defensive tackle and old-timers recall that he was extremely talented on both sides of the line.  The 1954 Tech Gridiron Guide stated, “Preas can block and tackle with the best of them-and his drive and experience make him one of the top players in football.”