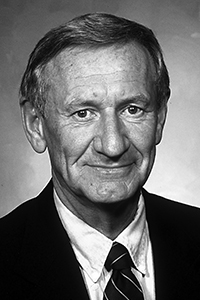 George Welsh, born in Coaldale, Pennsylvania, graduated from the U. S. Naval Academy in 1956, where he was an All-American quarterback. After a nine-year turn as an assistant coach at Penn State University, Welsh became head coach at his alma mater, leading the Midshipmen to three bowl appearances and a record of 55-46-1 in nine seasons. Welsh’s famed career at the University of Virginia began in 1982. Over 19 seasons, he lifted the Cavaliers to an unprecedented level of success that included 12 bowl game appearances, including their first-ever Peach Bowl in 1984, and two ACC titles. Welsh was named ACC Coach of the Year five times and National Coach of the Year three times. He is the all-time winningest coach at UVA and second all-time in the ACC, and is a 2005 inductee into the College Football Hall of Fame