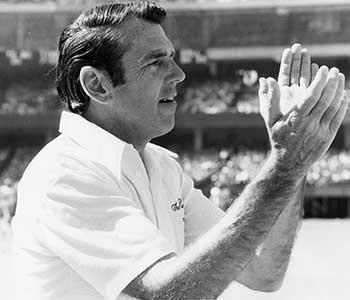 In 1971, Coach George Allen took over a Washington club that had only one winning season in the previous fifteen years, and molded them into perennial league title contenders. It was Allen who was responsible for the “Redskinsmania” which swept the Washington, D.C. area, including Virginia and Maryland. At R.F.K. Stadium, the Redskins, under Allen, had a .805 winning average and sold out every home game. In 1948, Allen took his first head coaching position at Morningside College. In 1966, Allen was named head coach of the Los Angeles Rams. Following a highly successful five-year stint as head coach for the Rams, finishing with an overall record of 49-17-4 and the distinction of winningest coach in Rams history, Allen signed on with the Washington Redskins. His very first season with the Skins saw an immediate turn-around. Allen guided the team to a record of 9-4-1, their best in 26 years. The eventual total after seven seasons came to 67-30-1. Allen’s personality and hence coaching style combined innovation, a devotion to detail, communication and an overriding determination to win. The training facility established by Allen, Redskin Park, mirrors his pragmatism. State-of-the-art at the time, Redskins Park, still leads the league in forward thinking. In the Park and on the field, Allen emphasized the little things, which prevent big problems. He stretched for every edge possible, constantly urging by example those around him to come up with ideas that would cut down the incidence of defeat. Allen was never satisfied with the status quo. Reconfiguring the team dynamics through heavy trading and aggressive draft picks, Allen made the most trades in NFL history, 133. Through this method of team development, he created the “Over-the-Hill Gang,” a group of veteran players. The strategy grew out of a common sense philosophy: put proven, tried, professional athlete in every position instead of a younger player who gives every indication of excellence but no assurances. Living his motto, “The Future Is Now” earned Allen more than a dozen Coach of the Year awards. He is the only coach to have been awarded this honor by the Washington Touchdown Club three times. He received the key to 16 cities and commendations from seven countries. In addition to having been appointed Chairman of the President’s Council on Physical Fitness and Sports by former president Ronald Reagan, Allen three times received the presidential commendation. Allen invented the “nickel and dime” defenses, hired the first special team’s coach, and in 1966, initiated the NFL’s first drug program. His breadth of experience culminated in the publication of 11 books by Allen on football and motivation.