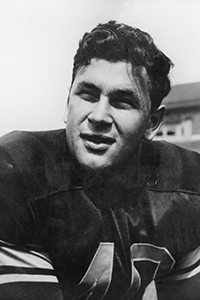 George S. Hughes is a former William & Mary and National Football League star lineman.  When notified he had been nominated to the Virginia Sports Hall of Fame he said, “It’s quite a thrill.  Football has been a wonderful thing to me.” Hughes, a native of Norfolk, was an outstanding center and linebacker at Maury High School.  After graduation in 1943, he joined the United States Air Force and flew 22 combat missions as a B-29 gunner during World War II.  He was also a Heavyweight boxer, who won all of his fights on an Air Force team in 1943.

From 1950-1954, Hughes was an offensive guard and tackle with the Pittsburgh Steelers, gaining all-pro honors in 1952 and 1954.  He also punted and was used by the Steelers in their goal-line defense unit.

In 1955, after opening a hardware business in Ocean View, he came out of retirement in 1965 to coach the Norfolk Neptunes of the Continental League serving as the offensive line coach.  After three years as assistant, he was head coach in 1968, and in 1969, co-head coach with Gary Glick, and in 1970, again as head coach.  In 1974, he became the offensive and defensive line coach of the Ottawa Rough Riders of the Canadian Football League, a position he held for seven years.  His 1976 Ottawa team won the Grey Cup.

Hughes has been named to the William & Mary Hall of Fame, voted Chesapeake Athletic Club’s Man of the Year, and Man of the Year in Sports by the Norfolk Sports Club in 1979.