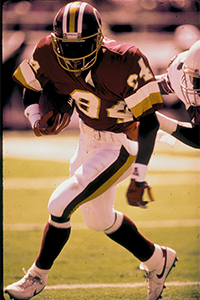 Gary Clark was born and raised in Pulaski, Virginia.  He attended Pulaski County High School and lettered in three sports—football, track, and baseball before heading to James Madison University in Harrisonburg, where he played Division I-AA football.  As the Dukes’ wide receiver, he earned the 1982 Virginia Offensive Player of the Year award and All-American honorable mentions in his junior and senior years.

He went sixth overall in the USFL draft, played for two years with the USFL’s Jacksonville Bulls, and then signed with the Washington Redskins in 1985.  Despite his 5’9” and 180-pound stature, he garnered a reputation as one of the toughest wide receivers in the NFL.  He was a member of “The Posse,” the Redskins’ high-scoring trio that included fellow receivers Ricky Sanders and Art Monk, and was known as the feistiest of the bunch, often running laps around the stadium after touchdowns.  He is often regarded as the heart and soul of the Joe-Gibbs-era Redskins.

Over his eight seasons with Washington, this inductee earned two Super Bowl rings and four Pro Bowl appearances, and ranks third in the team’s history in receptions (549) and receiving yardage (8,742).  He proved himself in the eyes of CBS commentator John Madden, who admired his toughness and ability to make big plays, and was a regular on the All-Madden team during his playing career.

In 1994, he was inducted into the JMU Hall of Fame, and is the first person at JMU to have his jersey retired.  In 2002, Redskins.com listed him among the 70 greatest Redskins of all time in celebration of the team’s 70th anniversary.