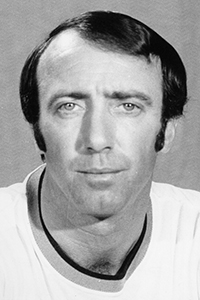 Born in Henrico County in 1940, Alley is a native Virginian. He attended Hermitage High School and developed into an outstanding baseball player. By the end of the 1963 season, Alley had worked his way up to the shortstop position of the Pittsburgh Pirates. An especially strong glove man at shortstop, Alley teamed up with second base man Bill Mazeroski to form one of the most outstanding double play combinations in all of professional baseball. While playing for the Pirates, Alley’s teams won division titles in 1970, 1971, and 1972. He played shortstop for the World Champion Pirates team of 1971. In 1967 and 1968, Alley was named to the National League All-Star Team, giving him the honor of playing in the 1967, 15-inning game in which the National League defeated the American 2-1. Alley retired following the close of the 1973 season, going on to a career in the private sector. During his 11 seasons in the majors, Alley appeared in a series of games in 7 seasons of his ten full seasons with Pittsburgh and had over 100 hits in 5 of those seasons, sporting a lifetime batting average of .254. Alley’s career nearly ended in 1965 when a fast ball thrown by New York Mets pitcher Bob Shaw caught him flush across the left side of his face. The injury required nine stitches over his left eye and knocked Alley unconscious. Alley was back in the line-up four days later with a badly bruised and discolored face. As the first man up to start the game, Alley hit the first pitch thrown out by Cincinnati Reds pitcher Milt Papas for a line drive single.