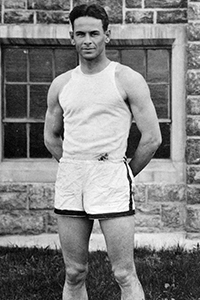 Frank Peake was a star at Hampton High School before going to Blacksburg where he was a standout in Virginia Tech’s “Pony Express” backfield from 1925 through 1928.  During his four year term with the Gobblers, Peake was a phenomenal track performer, but his most brilliant exploits were on the gridiron.

Statistical compilation was an infant sports science in Peake’s college “golden years,” yet yellowed newspaper clippings backed by testimony from teammates and old-timers credit the Hampton native with ground-gaining feats comparable to modern-era records.  An account of the game in Peake’s first season, a contest pitting the Gobblers against Virginia for dedication of Miles Stadium, reports that the swift, elusive Hamptonian rolled up 675 yards as Virginia Tech defeated the Cavaliers 6-0.

Newspaper accounts noted that Peake’s “average per game during his four years was close to the 200-yard mark” and “did most of his remarkable ground-gaining without the assistance of a good line in front of him.”  For his exploits, Peake gained All-America mention, but old-timers point out “that was really something in those days, when Eastern schools and mid-western players dominated in the All-America selections.”

Peake also competed in the high and broad jumps, 440 and 880, and one writer reported, “when Frank was feeling good, he entered the 220, too.”  In football, his running prowess overshadowed his talent as a punter.  Available records at the time indicated he averaged 46 yards per kick in his four seasons.