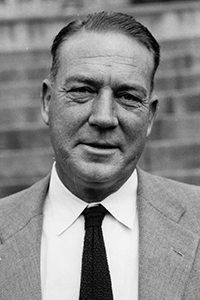 Frank Summers, a native of Alexandria, graduated from Virginia Military Institute in 1922 as second ranking officer in the Cadet Corps. He was the first man in Virginia Military Institute history to win letters in football, baseball, basketball, and track with 12 letters in three years. Summers played tackle on Virginia Military Institute’s only undefeated, untied football team known as “The Flying Squadron.” He was All-Conference his senior year in basketball and enjoyed an outstanding baseball career. He played both as an outfielder and a catcher and was considered a very fine hitter. Summers also captained the track team. Upon graduation, Summers coached at Staunton Military Academy where one of his star pupils was former Arizona Senator and Presidential candidate Barry Goldwater. He served as both athletic director and coach at Hampden-Sydney before coaching at Randolph-Macon. Summers ended his coaching career as athletic director for Virginia Military Institute in 1951. Few people knew that Summers won the heavyweight boxing championship while stationed at Camp Knox, Kentucky in the summer of 1921. He also rowed for the Old Dominion Boat Club during summer months in Alexandria. Summers died on August 17, 1974 at the age of 75.