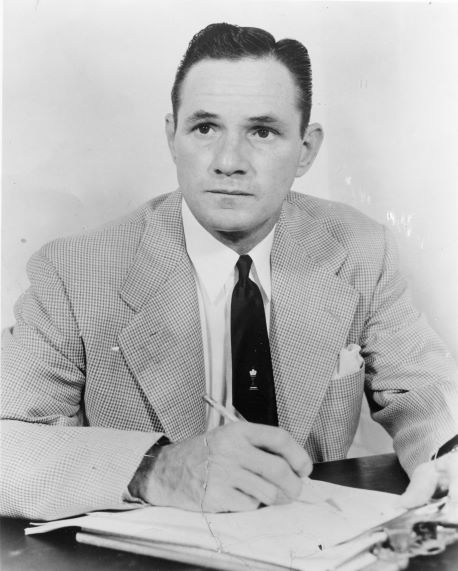 Almost every field and building of the Virginia Tech sports complex is a monument to the dedication and unflagging energy and efforts of Moseley.   Both as a visionary and the fund-raiser, he was the prime mover behind the hundreds of coworkers and thousands of alumni who were brought to fruition of his most grandiose plans.  Moseley also founded the wellspring of the expansive facilities when he organized the Virginia Tech Student Aid Foundation.  He set it into motion in his first year at Blacksburg and it has thrived since then.

Moseley made his presence first felt at Tech and in Virginia as its head football coach in 1951.  Prior to Moseley’s arrival, Tech’s Gobblers had a miserable 1-25-3 record the previous three seasons.  Three years later, in 1954, he led the rejuvenated Techmen to an 8-0-1 record, including conquests of North Carolina State, Wake Forest and Clemson.  In his 10 coaching years, Moseley’s teams ran up a 54-34-4 record.   He was honored as Coach of the Year in 1954 and, in 1967 was presented a special award for his outstanding contributions to athletics in the State.

Frank Moseley is a native of Montgomery, Alabama and graduated from the University of Alabama where he won letters in football as a quarterback and in baseball as a catcher.  He quarterbacked some of Alabama’s finest squads, which included teammates like all-time college and pro great Don Hutson.    Moseley was in the Navy for three years in World War II, and then returned to coaching, where his first job was as an aide to Paul “Bear” Bryant at the University of Maryland.  He later accompanied Bryant to Kentucky where he remained until he accepted the coaching-athletic director position with VPI.