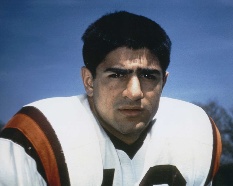 Frank Loria, Virginia Tech’s first consensus football All-American gained this honor in 1965 and 1966 as a safety man.  He, according to his former coach Jerry Claiborne just made things happen and had a knack for football that you find in very few players.

Loria wasn’t very big, 5’7 and 172 pounds, but he was all heart, a smart player who just seemed to be at the right spot at the right time.  While at Tech he set many records for punt returns and pass interceptions.  Loria was a native of Clarksburg, West Virginia and a star athlete at Notre Dame High School, before entering Virginia Tech.

Considered to be one of the best defensive backs in Virginia Tech history, and whose number 10 jersey was retired, Loria started every game from 1965 through 1967.  As a junior in 1966, he was selected First Team All-America for his tenacious play as a defensive back for the Hokies.  Loria had an uncanny ability to diagnose plays and pass patterns.  Recognized as a coach on the field, Loria was elected team captain in 1967 and won the team’s Williams Award for his leadership, character, and influence on his teammates.  An outstanding punt returner, Loria still holds the Virginia Tech record for longest punt return with a 95 yarder for a touchdown.  In his career, he ran back four punts for touchdowns.  He was inducted into the Virginia Tech Sports Hall of Fame in 1982.  Academics were also a high priority with Loria, where he was a first team GTE/CoSIDA Academic All-American in 1967.

After a stellar career with the Hokies, Loria was an offensive coordinator for Marshall University.  He was killed in a plane crash that wiped out the Marshall football program in 1970, at the age of 23.  The tragedy was extremely devastating to his wife, who was seven months pregnant with Frank Jr., when Loria died.

Loria will always be remembered as one of Virginia’s greatest athletes and for his contributions to sports in the state.