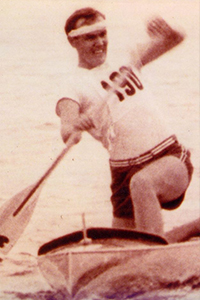 Frank Havens is an Eastern Shore resident with the rare distinction of being a four time Olympian. An Arlington native and a graduate of Washington & Lee High School, Havens played on the football team.  He was destined to become an Olympian the day he was born, August 1, 1924, four days after the Olympics competition that his father was scheduled to compete in, but did not for fear of missing his son’s debut into the world.  Many years later in the 1952 Olympic Games at Helsinki, Finland, Havens won the grueling 10,000-meter Canadian single-blade race in 57 minutes and 41 seconds.  He broke the world record set by Czechoslovakia’s Frantisek Capek.  He proudly presented the gold medal to his father, thanking him for waiting around until he was born.

Havens competed in four Olympics-1948 at London, 1952 and 1956 at Melbourne, Australia and 1960 at Rome.  He was a leading candidate to be the United States’ flag–bearer in the opening ceremonies at Rome, but at the last minute the honor went to decathlete Rafer Johnson.  In Haven’s first shot in the 1948 Olympic games, he finished second to Capek by 35.4 seconds in a canoe he borrowed from the Czechs.  In 1952, his world record was set in a canoe he and his brother, Bill, imported from Sweden for about $160.00.

Havens, whose many accomplishments include the National Paddling Single Blade championships in 1950, 1951, and 1952, refuses to rest.  In the 1985 Masters Games in Toronto, at the age of 61, he paddled his way to seven first-place medals in seven races.  The former Olympian continued his extraordinary victory streak in the World Games in Denmark.  Havens still remains the only American Olympic gold medal winner in a singles canoeing event.