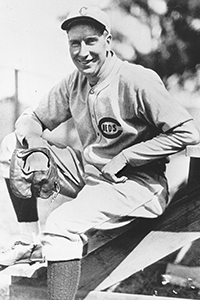 Until he was surpassed by Warren Spahn in 1962, Rixey held the National League record for victories by a left-hander, with 266.  Born in Culpeper, Virginia, Rixey played golf, tennis and basketball for the University of Virginia until off-season umpire Cy Rigler, studying at UVA as well as coaching baseball and basketball, encouraged the 6’5”, 210 pound Rixey to try his hand at pitching.

Rixey pitched for first-division clubs in only 9 seasons against 12 in the lower half.  He pitched on only one championship club early in his career, the 1915 Phillies. Yet as late as 1932, at the remarkable age of 41 and in his 20th season, Rixey pitched 27 consecutive scoreless innings.  When Rixey was on first-division clubs, he could win.  In his first five years with Cincinnati, he hurled an even 100 victories, topped with a 25-13 performance with the second place Reds of 1922.  That year Rixey led the League in both victories and innings pitched (313).

His unusual height, southern gentlemanly manners, reliable pitching strength and strange name made Rixey a fan favorite.  Coming from an old Virginia family with roots buried in the 18th century, “Eppa” was an inherited family name, the Jeptha part was pure fiction created by a Cincinnati sportswriter who just liked the sound of it.

Rixey retired from baseball in 1933 but on February 28, 1963 he passed away, which was the same year he was elected to the National Baseball Hall of Fame.  Eppa Rixey will always be remembered as one of Virginia’s greatest baseball legends.