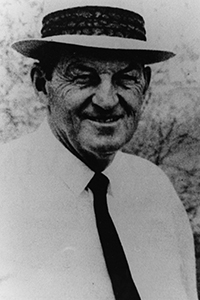 One of the founding fathers of intercollegiate athletics at Washington & Lee University, Twombly coached W&L teams to more than 400 victories and guided the University’s athletic progress for more than half a century.

W&L benefited greatly from Twombly’s brilliance for 50 plus years, but he certainly could have had a career of on-the-field success as well.  He pitched pro and semi-pro baseball for 19 years and his record included several no-hitters. Twombly signed with Chicago after graduating from Springfield College in 1921.  That summer, he pitched for the White Sox of the American League and in the fall, began his career at W&L.  He once had 20 strikeouts in a 7-inning game.  Twombly played with or against Hall of Famers Walter Johnson, Tris Speaker, Babe Ruth and Ty Cobb.

Upon arriving at W&L, Twombly immediately took control of the swimming and golf programs and began a tradition of tremendous success.    In 39 seasons as a swim coach, Twombly’s teams posted a 122-49 record, including 4 Southern Conference Championships and a stretch of 5 unbeaten seasons.   He finished his stint as swim coach with 11 consecutive winning seasons, including a perfect season in 1960, Twombly’s last as Head Swim Coach.

Twombly was equally successful as the Generals’ Head Golf Coach.  His teams posted a record of 196-121-26 from 1926 through 1974.  Twombly’s golfers won 2 Southern Conference Championships and a half dozen State Titles.  Twombly, who himself shot a course record 63 at the Lexington Golf and Country Club, coached several players who went on to play on the U.S. Walker Cup Teams.    He also was one of the founding fathers of the Virginia Intercollegiate Golf Championships.

Twombly served as Athletic Director during 15 tumultuous years in the university’s athletic history.   It was Twombly’s steady hand that guided W&L through its decision to do away with subsidized athletics in 1954.  Twombly retired in 1969 although continuing to coach golf until his passing in 1974.