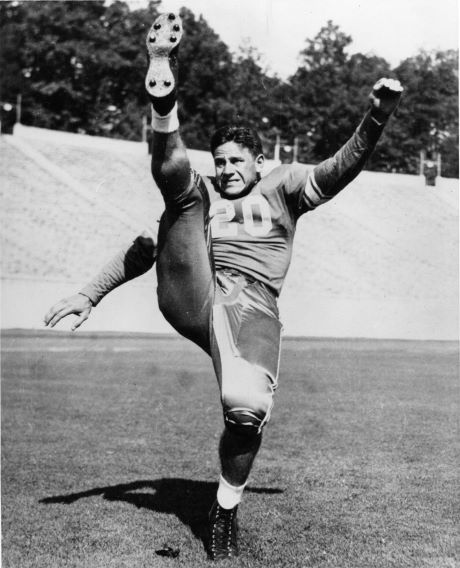 Eric Tipton was born in Petersburg, Virginia where he graduated from Petersburg High School. He entered Duke University upon graduation and went on to become one of the all time greats in Duke football history, being named All-American as a halfback in 1938. Tipton√ïs playing career at Duke University saw him not only as a star in football but baseball as well, where he excelled as an outfielder and later played professional baseball with the Cincinnati Reds. Many Blue Devil faithful will remember the game on November 28, 1938 against the University of Pittsburgh. Tipton repeatedly punted the ball out of bounds inside the 15-yard line to overcome the excellent offensive backfield of Pitt√ïs “Dream” team. During Tipton’s varsity days at Duke, the Blue Devils amassed an incredible 25 victories against only four defeats, winning the Southern Conference championship in 1936 and 1938. After college, Tipton entered professional baseball and served as backfield coach at the College of William & Mary and many years later served as head coach for baseball for the Army. Tipton was named to the College Football Hall of Fame in 1965.